It was a year ago today that I launched oTranscribe: a small web app designed to ease manual transcription of audio recordings.

The app had already been online for a couple of weeks at that point (the first commit was on October 5), but with the working title ’Transcriber’ and barely any promotion1. Since then, repeat users (a custom metric; the number of visitors to oTranscribe.com who have visited at least once already) has risen from zero to almost 3,000 per week2. 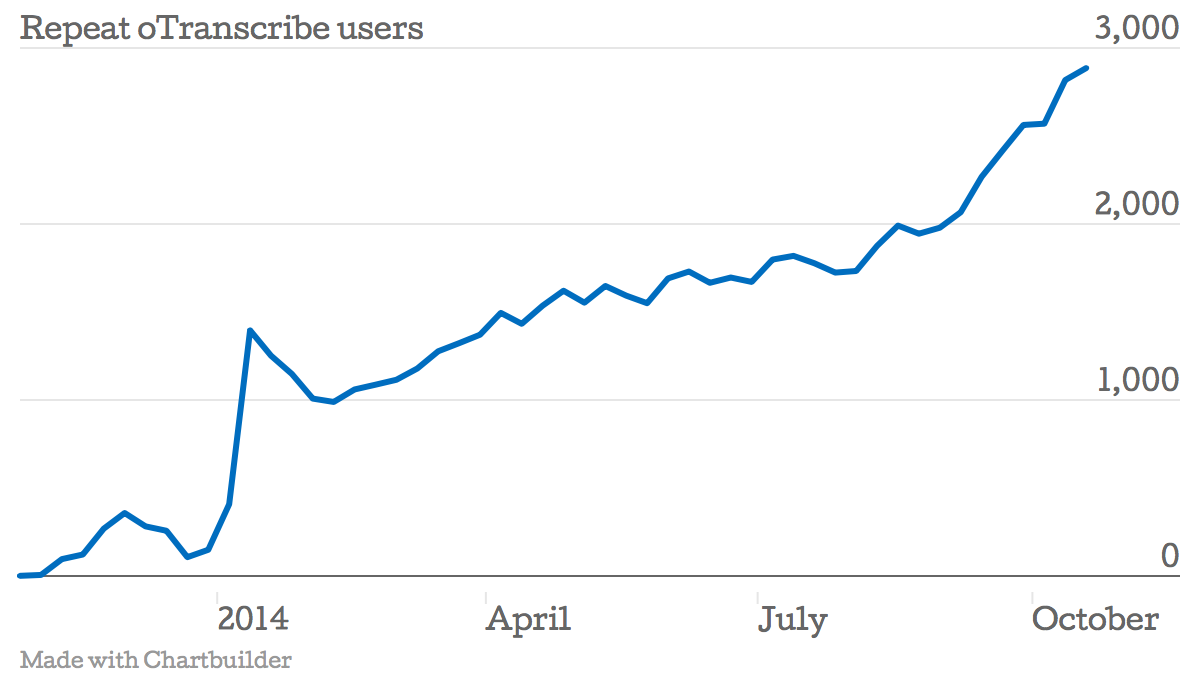 And it's being used in over 100 countries around the world. Here’s a random sample of visits from between May and August this year visualised using CartoDB:

This growth is almost entirely viral; there hasn’t been any major press coverage of oTranscribe since February.

This may not seem like much compared to the splurge of features added in the first three months. It's partly because I've been busy with an exciting new job, but also because getting the interface translated is surprisingly time-consuming. (Did you know, for example, that the Polish for 'words' has more than one plural form? I do now.) Mind you, it would have been infinitely more difficult without help from oTranscribe's generous translators.

Very soon, I’ll be rolling out a new import/export file feature. Transcripts will no longer locked in a single browser: they can be downloaded as a .OTR file, sent to a friend, and opened on another computer. As an added side-effect, oTranscribe will finally get a 'switch audio' button for changing audio (or video) files mid-session.

With these, I think I’ll have implemented the majority of “must-have” features. My to-do list for the second year of oTranscribe is:

If you have any suggestions for additions, or have spotted something needing fixed, I recommend opening an issue on GitHub or emailing me. And if you feel really passionate about investing in the future of oTranscribe, and are a dab hand at JavaScript, feel free to submit a pull request or two.

Anyway, regardless of technical proficiency, I'd like to extend my thanks again to oTranscribe's thousands of users. It feels kind of strange to write that: thousands of users. Sure, they're hardly Facebook numbers, but it's still humbling to think that so many people find my little app so useful. Here's to many more years, and many more users, of oTranscribe.