CrowdTip: Our winning hack at Build The News 2

This weekend I took part in The Times' Build The News hackathon as part of a hastily cobbled together team of student journalists (Adrián Blanco and Lukas Rapp) and WSJ staff (Jovi Juan and myself).

Our winning entry was CrowdTip, an alternative commenting platform designed to engage readers in the editorial decision-making process.

It consists primarily of a widget embedded into news articles, with buttons presenting different areas future coverage could explore. Pressing one of these immediately submits a vote.

Readers can follow up their initial vote with optional text explanations providing further detail and (if really invested in the story) enter their email address to be notified of future coverage.

Votes are then visualised on a separate dashboard, making it easy for editors to understand what their audience would be interested in reading. 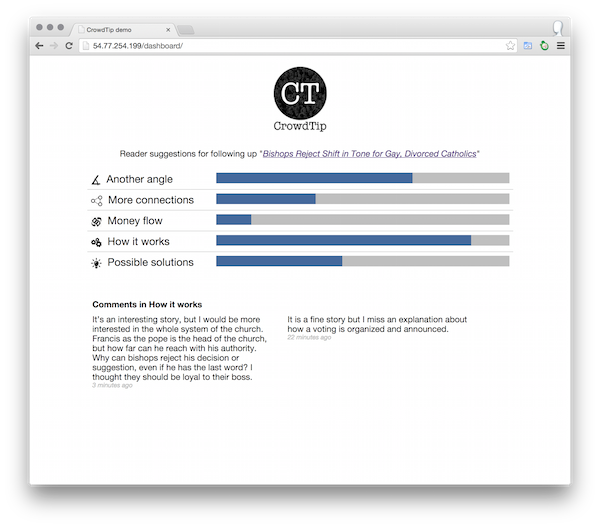 That's the idea, anyway. Our proof of concept (developed over the course of just a few hours this morning) lacked a backend, so votes weren't actually being tallied. We also had initial ideas of 'gamifying' CrowdTip which, due to time constraints, were left on the drawing board.

Will it become a real product? I have no idea. I'll need to brush up on my backend development skills first. Perhaps this could be a good project to (finally) learn Ruby on Rails with.